Dottie Rambo got her start in Southern Gospel by writing songs and performing at revivals. She was eight years old when she first became interested in writing songs. By the age of 12, she had left home to sing full time. Governor Jimmie Davis of Louisiana heard her music and signed her to a writing contract when she was still in her teens. She married Buck Rambo when she was 16, and their daughter Reba Rambo was born when Dottie was 18. Reba began performing with the group when she was three years old and as she grew older, the Rambos, originally called the Gospel Echoes, grew to be one of the most popular family trios in gospel music.

In addition to performing, Dottie Rambo wrote more than 2500 songs. Her tunes have been recorded by dozens of secular artists and hundreds of gospel artists. Whitney Houston’s version of "I Go To The Rock" was included on the movie soundtrack for The Preacher’s Wife which sold over two million units. Driven by Houston’s performance, the song was recognized with a Dove Award for Song of the Year in 1999.

As the years passed by, Dottie Rambo endured more than her share of pain and heartache. She suffered with chronic back trouble and underwent several surgeries. At various times, her health problems left her in comas. On the home front, Dottie and Buck Rambo’s marriage ultimately failed and the subsequent divorce was particularly painful. Dottie experienced a comeback of sorts in later years, though. Barbara Mandrell hosted a televised Tribute To Dottie Rambo in 2002. In 2003, Rambo released Stand By The River, her first album in 18 years. Dolly Parton joined Dottie for a duet on the title song.

Like her songs, Rambo’s awards were also numerous. She got her first Grammy in 1968 for a solo project titled It’s The Soul Of Me. In 1994, the Christian Country Music Association named her “Songwriter Of The Century”. In 2001, ASCAP recognized Rambo with a Lifetime Achievement Award. Rambo was also a dual member of the GMA Hall Of Fame, having been inducted both as an individual and as part of the Rambo Trio.

Dottie Rambo was the first soloist to have a number one song on the Singing News chart. "Tiny" (from her solo project Heartprints) held the top position in March and May of 1972. The Rambos also had a number one a few years later. "I’ve Never Been This Homesick Before" reached the top position in November of 1977. Other popular songs written and performed by Dottie Rambo over they years include "Tears Will Never Stain The Streets Of That City," "If That Isn't Love," "He Looked Beyond My Faults" (to the tune of "Londonderry Aire" AKA "Danny Boy"), "Too Much To Gain To Lose," "Sheltered In The Arms Of God," and "We Shall Behold Him."

On May 11, 2008, Dottie Rambo died when her motor coach struck an embankment on I-44 near Mt. Vernon, Missouri. She was traveling from Granite City, Illinois where she had performed on Saturday evening at Calvary Life Church. According to Pastor Mark Maynard, her final concert began with "I'm Gonna Leave Here Shoutin'" and ended with "We Shall Behold Him." 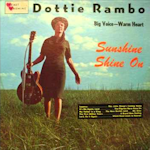 hi-res
1965 Sunshine Shine On (Heartwarming Records/Benson Records/Stereo Version LPS-1806/High Fidelity Version LPHF-1807): Sunshine, Shine On; The Pilgrims Have Gone On; It’s Me Again Lord; My Father Is A King; The First Million Years; My Altar; This Little Sheep’s Coming Home; Lord Do It Again; A Brand New Feeling; Which Road Leads To Heaven; The New Beulah Land; Lazarus. 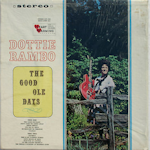 hi-res
1965 The Good Ole Days (Heartwarming Records/Benson Records/Stereo Version LPS-1830/High Fidelity Version LPHF-1831): The Good Ole Days; Don't Take My Crown Away; These Things; It's All In Jesus; He Brought Me Through; Naaman; Zacheus; This Is My Father's World; God's House Of Rest; Wait For An Answer; Up The Golden Highway; The Things I Learned At Mother's Knee. 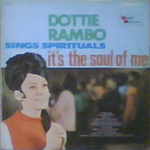 1968 Dottie Rambo Sings Spirituals: It's The Soul Of Me (Heartwarming Records/HWS-1973): The Soul Of Me; Just Enough Heaven; Swing Low; Reach Out For The Life Line; His Steps Didn't Stop At Calvary; He Ain't Never Done Me Nothin' But Good; The Healer's Comin' Down The Road; Then I'll Know; When The Great Trumpet Sounds; I Have A Father Who Can; I've Been Talkin' To The Lord About You; I Don't Want To Do Anything. 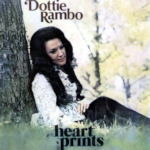 hi-res
1971 Heart Prints (Heartwarming Records/R3131) Who's Gonna Teach My Children's Children; Just A Simple Prayer; You've Never Mentioned Him To Me; A Hymn From Way Back Home; Tiny; Pass Me Not; Wonder If Anyone Cares At All; You Have Found It All; Looks Like Everybody's Got A Kingdom; Reach Out Your Hand.

1977 Love Letters (Heartwarming Records/R3454): He Knows Just When To Give Me A Song; Love Letters; I Go To The Rock; Sweet Mountain Mornin'; Mary Was The First One To Carry The Gospel; The World Needs Some Good News Bad; Home's Where The Heart Is; I'll Only Love Him Forever; He Never Looked So Good To Me; I'll Still Feel The Same About You. 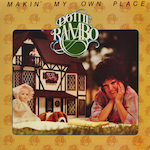 hi-res
1981 Makin’ My Own Place (Heart Warming Records/R3772): Makin’ My Own Place; He Looked Beyond My Fault (And Saw My Need); He Went Out Of His Way; The Whole World Is A Vineyard; The Mercy Throne; The Stable Housed A Mighty King; Little Boy; His Name Is A Strong Tower; Lord Of Me; Don’t Pick Up The Pieces. 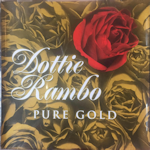 hi-res
2002 Pure Gold (Trinity Broadcasting Network/): Tears Will Never Stain The Streets Of That City; If That Isn't Love; Build My Mansion; I Will Glory In The Cross; Remind Me Dear Lord; Holy Spirit Thou Art Welcome; Too Much To Gain To Lose; Mama's Teaching Angels How To Sing. (compilation of previously released songs).

A Hymn From Way Back Home
A Song The Holy Angels Cannot Sing
Angels Sound The Golden Trumpet
Another Mountain Another Valley
At The Meetin'
Behold The Lamb
Big Big Man
Bring All Your Needs To The Altar
Build My Mansion
By And By The Night Will Vanish
Come Spring
Constantly Aware Of His Love
Don't Let Me Stray Too Far From Calvary
Don't Lift The Anchor
Don't Take Jesus
Don't Take My Cross Away
Eternity Will Be Long Enough
Exactly What I Need
Father Dear I'm Coming Home
First Time I Heard About Heaven
First Time I'll Be Home
Follow The Leader
For What Earthly Reason
Garden Of My Heart
Gettin' Ready Today
Getting To Know You Better
God Has No Certain Dwelling Place
God, You Never Cried
Going Through The Trials
Going To A Wedding
Good News Got Around
Harbor In The Time Of Storm
He Ain't Never Done Me Nothin' But Good
He Changed My Tears To Showers Of Blessings
He Looked Beyond My Faults
He Must Die
He Was The Talk Of The Town
Heaven Will Never Welcome A Sweeter Mama
He's Already On His Way
His Steps Didn't Stop At Calvary
Holy Spirit Thou Art Welcome
How Graciously Grace Has Covered My Sins
How Many Rivers
I Call Him Lord
I Don't Want To Do Anything
I Gave Him Nothing Till I Gave Him All
I Go To The Rock
I Have A Father Who Can
I Have Hope
I Heard Footsteps
I Just Came Into His Presence
I Just Came To Talk With You Lord
I Love The Name
I Still Believe
I Will Glory In The Cross
I Will Not Overshadow
I Won't Ask For More
I Wonder If The Angels Could Use Another Singer
If I Could Do It All Over Again
If I Were My Brother
If That Isn't Love
I'll Sleep Beside You Someday
I'm Gonna Leave Here Shoutin'
In And Out
In The Beginning
In The Beginning God Was
In The Valley He Restoreth My Soul
Is That The Lights Of Home
Is There Anything I Can Do For You
It Will Pass
It's Me Again Lord
I've Been Talkin' To The Lord About You
I've Learned To Lean On The Lord
I've Never Been This Homesick Before
I've Seen All Of This World
Jesus Thou Art Fairer To Me
Just Enough Heaven
Just For A Day
Just In Time
Keeper Of The Well
Kind Shepherd
Let Go Of This World
Lord Do It Again
Love Letters
Made Up Mind
Mama Always Had A Song
Mama's Teaching Angels
Marvelous Grace
Mercy Throne
Midnight In The Middle Of The Day
My Altar
My Heart Can See
My Old Friend
My Song Is New
My Unchanging Friend
My Visit To Heaven
Naaman
New Shoes
No Lock On My Mansion Door
Not Until
Nothing
Nothing Like Home To Me
Now You Can Walk With Me
Old Home Place
On The Sunny Banks
One More Valley
Out To Sea
Prisoner Of Love
Promises
Queen Of Paradise
Reach Out For The Life Line
Red Scarlet Cross
Remind Me
Remind Me Dear Lord
Remind Me Lord
Resurrection Day
Ringing Of The Hammer
Running My Last Mile Home
Sailing Toward Home
Send In The Clouds
Sheltered In The Arms Of God
Shepherd Of The Hills
Silent Bells
Sing Me A Song Tomorrow
Somebody Else Will
Somebody Prayed For Me
Somebody Stepped On Board
Stand By The River
Stand Still And See His Glory
Sunshine Shine On
Swing Low
Take Me For A Cleansing
Taste Of The Lamb
Tears Will Never Stain The Streets Of That City
Thank You For The Valley
That's Just His Way
The Church Triumphant
The First Time I Heard About Heaven
The Good Lord Walks With Me
The Grass Is Greener On The Other Side
The Harvest
The Healer's Comin' Down The Road
The Holy Hills Of Heaven
The Sandals
The Son Is Shining
The Soul Of Me
The Touch Of Mama's Hand
Then I'll Know
Things Are Gonna Be Better Afterwhile?
This Is My Valley
Today Is Tomorrow's Yesterday
Too Much To Gain To Lose
Touched With His Love
Travelin' Man
Troubles Can Break You Or Make You A Man
Unmerited Favor Of God
Until He Comes
Waiting For The Son To Come On Down
We Are Like Children
We Shall Behold Him
We've Weathered Storms Before
What Can I Offer
What Will It Be Beyond The River
When I Lift Up My Head
When Is He Coming Again
When Payday Comes
When The Great Trumpet Sounds
Where Did All The Good Folks Go
Where Goes The Wind