George Wilson Younce was born in Patterson, North Carolina on February 22, 1930. As a teen, he formed a group with some friends called the Spiritualaires in early 1946, initially singing lead. As his voice matured, though, he stopped singing for about a year until a man named Ike Miller, the father of one of the other boys in the Spiritulaires, encouraged him to sing in the bass range. After the bass singer for the Spiritualaires resigned, Mr. Miller asked Younce to return to the group. Younce sang with them until 1950 when he enlisted in the Army.

After his return from service, Younce experienced salvation at his home church. Some time later, he visited West Virginia to see the parents of a man who had died overseas. While there, he learned that a local group called the Watchmen Quartet had an opening at the bass singing position. He moved to Glenfork, WV to sing with the Watchmen for a while, meeting his future wife Clara along the way. A few weeks after the Watchmen shared the stage with the Weatherfords at an event in Huntington, WV, Earl Weatherford called Younce to ask him to join their group.

In the meantime in Ohio, Earl & Lily Fern Weatherford parted ways with the ministry of Rex Humbard. Former Weatherford Quartet members Glen Payne, Bobby Clark, and Younce's long-time friend Danny Koker remained with Humbard to form the Cathedral Trio in 1963. Both Payne and Humbard were keen on the idea of turning the trio into a quartet, so Humbard contacted Younce in 1964. He was reluctant to leave the Blue Ridge Quartet, but Younce ultimately joined the group for which he will always be remembered, the Cathedral Quartet.

After the departure of Danny Koker, Younce became the group's primary emcee, a role he would maintain until the group retired. The Cathedrals sang at Rex Humbard's Cathedral Of Tomorrow, the venue from which the group took its name, where they also served on the church staff. In 1969, they decided to become a traveling group and struggled for several years before achieving some level of success with a stable lineup and their first charting radio single in 1974.

During the late 1970s, Bill Gaither started introducing the Cathedrals to a contemporary audience through his PraiseGathering events. Though their popularity started expanding, the group took a severe hit in 1979 when three group members left at the same time. The Cathedrals regrouped with Kirk Talley singing tenor and Steve Lee pulling double duty playing piano and singing baritone. A short time later, they added a 20-year-old piano player named Roger Bennett, with Lee shifting to play bass guitar until he yielded his dual role to Mark Trammell. It was this lineup that, in October of 1982, earned the Cathedrals their first number one radio single, "Step Into The Water." In those days, song rotation was virtually non-existant. "Step Into The Water" remained at the top position for another eight months!

In 1988, George suffered a heart attack, which sidelined him for several months. He eventually recovered and was able to return to full-time touring and recording with the Cathedrals. The group's last lineup changes came in 1990 when Ernie Haase joined to sing tenor and Scott Fowler replaced Mark Trammell to sing baritone and play bass guitar a short time later. The group's enjoyed another nine years of success, and were considered by most to be at the top of the Southern Gospel industry during that period. In 1999 Glen and George decided to retire the Cathedrals due to Glen’s age and George’s declining health. It was during their farewell tour that Glen became ill. He was diagnosed with liver cancer. Six weeks later, on October 15, 1999, Glen Payne passed away. The final concert of the Cathedrals was held on December 11, 1999, with Roger Bennett filling the lead singer spot that only Glen had held for the past 36 years.

After the retirement of the Cathedrals, George formed a new group, the Old Friends Quartet. The other members of the group were Jake Hess, Wesley Pritchard, George’s son-in-law and former Cathedral Ernie Haase, and Garry Jones. Old Friends Quartet released two projects and continued to tour until the death Jake Hess. Due to George's declining health, Mike Allen sometimes sang in his place when Old Friends Quartet would appear.

George also continued to perform with Bill Gaither and his Gaither Homecoming Tour when his health allowed. He passed away on April 11, 2005.

George was elected to the Southern Gospel Music Association Hall of Fame in 1998 and was an accomplished songwriter, penning classics like Yesterday and the novelty number known as The Laughing Song.

1997 I Believe (Spring Hill Records/CMD5412): Set Me On The Rock Joshua; It's Bound To Be The Lord; Love Was In The Room; The Love Of The Lord; I Believe In The Lord; You'll Get Your Reward Someday; I Don't Have To Tell You; When I Look On His Kind Smiling Face; It's Really Surprising; The Journey's End. 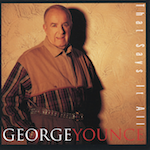 hi-res
1998 That Says It All (Spring Hill Records/CMD5455): While There's Breath In My Body; That Says It All; I'm Not Afraid Of Shadows Anymore; The Hand; Call Home; Rumormill; You Can Still Find A Friend In The Lord; Led By The Master's Hand; He Loves Me Because He Loves Me; I Couldn't Begin To Tell You. 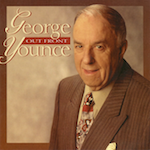 hi-res
2000 Out Front (Landmark Records/HD0041): Who Can Do Anything; Led Out Of Bondage; I Thirst; I'd Like To Say It Again; I Know Who Holds Tomorrow; Shout Over Heaven; Hold Me; Still Drinking Water From The Well; This Ole House; Suppertime.

2000 Day By Day (Cathedral Records): Send The Light; At The Cross; On Jordan's Stormy Banks; There's Room At The Cross; Take The Name Of Jesus With You?; I'll Put On A Crown; Take Up Thy Cross; Day By Day; Stand By Me; In The Upper Room; Who At My Door Is Standing.

2004 This Is George Younce (George Younce Music): He Is The Dearest Friend; Row Your Boat; He Came Back; Jesus Have Mercy On Me; Then I Found Jesus; Keep On The Firing Line; So I Love Him Dearly; Rumormill; Little Deeds; The Cross Was His Own; Seeing Eye Dog; This Old House.

2005 A Tribute To George Younce (Gaither Music Group/SHD2643): This Old House; Led Out Of Bondage; Child Of The King; Set Me On The Rock Joshua; Up Above My Head; An Old Convention Song; Cleanse Me; Move That Mountain; God Loves To Talk To Little Boys While They're Fishing; The Laughing Song; Thanks To Calvary; Sinner Saved By Grace; Going Home; Suppertime; Beyond The Sunset.

???? Poetic Reflections (George Younce Music): Beyond The Sunset; The Farmer And The Lord; How Did You Die; Steal Away; The Old Ship Of Zion; The Touch Of The Master's Hand; Forgive Me When I Whine; Brother Ira; Suppertime; Such Is Life.