Jeremy Peace joined the Kingsmen Quartet in 2004 after singing previously with a regional group called the Relations Quartet. His voice can be heard on the following Kingsmen recordings: Born Again, The Past is Past, and Good Good God.

Peace left the Kingsmen in 2007 and joined the Old Paths. He remained with them until they announced their retirement in 2015. He then joined the LeFevre Quartet. 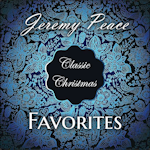 hi-res
2006 Classic Christmas Favorites: Have Yourself a Merry Little Christmas; Jingle Bell Rock; O Come All Ye Faithful; The Christmas Song; The First Noel; White Christmas (The songs on this CD were recorded in 2006, then re-issued in 2018).
All articles are the property of SGHistory.com and should not be copied, stored or reproduced by any means without the express written permission of the editors of SGHistory.com.
Wikipedia contributors, this particularly includes you. Please do not copy our work and present it as your own.