The Victors Quartet (of California) was founded by former Golden Keys and Songfellows tenor Al Harkins in Hollywood around 1968. They were a group of young men who billed themselves as having a refreshingly youthful sound... and ...mingled significant religious meaning with the melodic and rhythmic tempo of our day. They aimed to attract the attention of people with widely differing tastes in music.

In 1969, their second album, A Brand New Feelin' was released on Capitol Records. By this time Tracy Dartt had become their bass singer and Bill Caudle was the pianist. The LPs compositions were mainly by Harkins, Dennis Miller, and Dartt.

Before the end of 1971, Ed Loomis and Wayne Lansford had replaced the Miller brothers and Everett Evans had become their pianist. This lineup recorded the group’s third album, Put Your Hand In The Hand.

Newspaper advertisements for the Victors appear to have dried up in late 1972, which was around the time Tracy Dartt joined the Weatherford Quartet.

Other Victors Quartets
There was a Victors Quartet in Kingsport, TN in the mid through late 1960s. The Kingsport Victors recorded on the Heartwarming label and later with Tilford Salyer’s Tri-State recording Company on the Trail label. One lineup included Conway Corbin (tenor), Jim Lacy (lead), Tilford Salyer(baritone), Harmon Gouge(bass),and Edwin Taylor(pianist).

In the late 1950s, pianist/singer David Young was a member of a short-lived group called the Victors. Members during the short period included Young, Cat Freeman, Rex Nelon, Jack Lister, Bill Crowe, Ed Crowe, and Fred Rose. In the 1980s, Young restarted the Victors in Georgia and continued for a number of years. 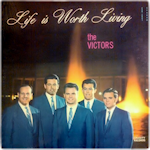 hi-res
1968 Life Is Worth Living (Charity Records/C68-6001): Life Is Worth Living; Since Then; Never Out Of His Sight; Train Bound For Glory; Like This Man; It's In Your Hands; Love That Was Meant For You And Me; A Place To Call Home; It's All In The Hands Of The Lord; To Know Christ (Is To Love Him); From Glory To Glory; Lord, I Heard You Call My Name. (Al Harkins, Terry Miller, Dennis Miller, Eldon Campbell, Gary Max). 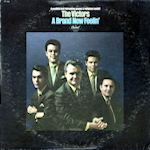 hi-res
1969 A Brand New Feelin' (Capitol Records/ST-196): Brand New Feelin’; In His Steps; Draw Nigh Unto Me; I Wanna Hear The Trumpet Sound; Closer To Thee; One More River To Cross; My Desire; Brotherly Love; All This And More; Since I Met Jesus; Hold On To Me. (Al Harkins, Terry Miller, Dennis Miller, Tracy Dartt, Bill Caudle). 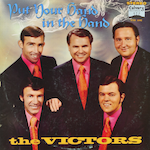 hi-res
1971 Put Your Hand In The Hand (Calvary Records/STAV-5042): Put Your Hand In The Hand; Precious Memories; I Know That God Is Real; All Of God's Little Children; He Reached Down His Hand; His Love Set Me Free; For God So Loved; Jesus Is The Bridge Over Troubled Water; Remind Me; Jesus Is Coming Soon. (Al Harkins, Ed Loomis, Wayne Lansford, Tracy Dartt, Everett Evans).
All articles are the property of SGHistory.com and should not be copied, stored or reproduced by any means without the express written permission of the editors of SGHistory.com.
Wikipedia contributors, this particularly includes you. Please do not copy our work and present it as your own.